We would like to invite you to a Happy Hour on October 28th, 2019 at 5 PM at Crave Kitchen and Wine Bar (in the Liquide Room)! We hope that many of you will have an opportunity to attend our event. We’ve invited former Lieutenant Governor for Saskatchewan, Dr. Gordon Barnhart to provide a key note address.

Come and join the Sask Chapter Team on October 28th at Crave Kitchen from 5 to 7pm for drinks and fellowship. Please RSVP at jeanmarc.nadeau15@gmail.com by October 23rd.

Gordon Barnhart is an historian and recognized expert on the Canadian parliamentary process. Gordon's extensive experience in government includes 20 years as Clerk of the Saskatchewan Legislature and five years as Clerk of the Canadian Senate. He has worked as a consultant to strengthen democratic governance in countries around the world. Gordon obtained a Ph.D. in history at the University of Saskatchewan, where he taught political studies and served as University Secretary. He has published several books on prairie history and Saskatchewan political figures. 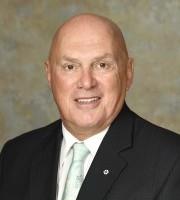 from May 2014 to October 2015. He served as Saskatchewan’s 20th Lieutenant Governor from August 2006 to March 2012. He was the Chancellor of the Saskatchewan Order of Merit, and Vice-Prior of the Order of St. John in Saskatchewan. In 2007, Gordon was named one of the University of Saskatchewan’s 100 Alumni of Influence. In 2013, he was awarded the Peter Lougheed Award for Leadership in Public Policy. In 2014, he became a Member of the Order of Canada.

Gordon established the Lieutenant Governor’s Leadership Forum to inspire high school students to rise to the challenge of leadership. The rigorous annual forum exposed participants to the vast educational and career opportunities in the province.

Gordon was elected to council in the Town of Saltcoats in December 2016 and President of the Saskatchewan Urban Municipalities Association in February 2017.

Gordon was born and raised in Saltcoats, Saskatchewan. He and his wife Naomi have a blended family of three grown children and five grandchildren.